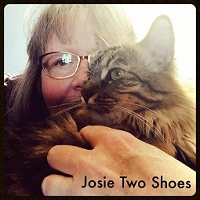 Who is Josie Two Shoes?  I first crossed paths with her a couple of weeks ago as she hosts the Ten Things of Thankful (TToT) blog.  TToT introduced me to a sweet group of bloggers who share their stories and encourage me to focus on the positives in my life.  I wondered about this Two Shoes who inspired other kind folks to respond so thoughtfully to my own meager TToT contributions.

My search for Josie Two Shoes was on!  Her blogger profile explains that a new chapter of her life started in 2007, when she declared that she was now standing on her own two feet.  That led me to her blog, where I discovered that she is also a writress.  A really good writress.  Wow.  Josie completed the A-Z blogging challenge by writing, and I quote: “a serial story in six-sentence segments involving twenty-six women living in the small Midwest town of Cottonwood Creek, their lives connected by the Women’s Circle of the town’s protestant church, Hope Christian Fellowship, to which they all belong.”  Talk about clever and intriguing!

By following Josie’s footprints, I discovered her Facebook page.  I was struck by Josie’s focus on being kind to yourself and others, not letting those stumbles and bumps define who you are.  I could have clicked “LIKE” on each post!

Josie’s shoes then led me to her Twitter account and from there, back to her blog, where I savored some of her writings on faith and the miraculous.

If you are looking for a place of encouragement and inspiration AND a safe spot to share your writing with others, follow Josie’s Two Shoes.  You’ll end up with a smile on your face and a polished pair of two shoes!