My dear Stacey, a kindergartner at risk for reading and language disabilities as well as autism, always triggers my special education radar when she speaks.  Or doesn’t speak.  Or just makes noises.  Granted, she has suffered serious emotional trauma, which can lead to regression in social interactions.  She also has an older autistic sibling.  On the other hand, she has older siblings who are excellent communicators and role models for appropriate language.

Stacey has been using an app to create her own “movies.”  The Disney Princess Story Theater app allows kids to create scenes and then add their own voice to three-part stories.  I thought this would be a good opportunity for Stacey to practice sequencing events, using her beloved Disney characters. 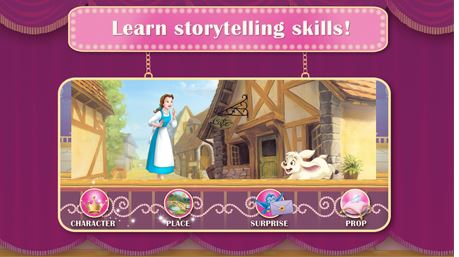 Once Stacey learned how to record her voice, her first recordings were predictably filled with shrieks and other oddball expressions.  After giving her time to  exhaust the Silly Factor, I recorded a model of a simple story with her.  We listened to the British voice give us a brief overview of each scene and we then recorded an appropriate follow-up sentence.  She can add words that logically describe what is happening in that scene or what might happen next.

After listening to all her recorded stories and scenes (my phone is full of princess videos!), the following features are consistent:

Conclusions:  The task is too difficult for her, although it has not diminished her thrill of recording “stories.”  Stacey remembers what she has heard and that overrides the pictures she’s seeing.  For instance, one of the stories describes Ariel hiding from some eels.  Stacey adds a part of that sentence to all stories about Ariel, even though the pictures are quite different.  Once she has “mastered” (memorized) a sentence, it seems to become her default sentence, regardless of the context.

Next informal step:  Purchase a sequence game of Princess cards (Tell Tale Disney Princess Game).   We can still record her stories from picture cards, if she prefers, but this should give her an opportunity to practice with more support from me and more time to think through her ideas.