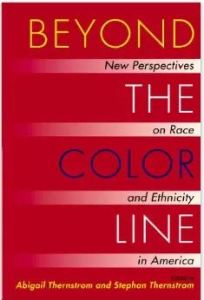 Beyond the Color Line: New Perspectives on Race and Ethnicity in America is my top choice for today’s AlphaBooks Blogging.  This book, published in 2002, is composed of 25 essays by leading researchers and scholars from the Hoover Institution.  The book is divided into 5 categories: The Big Picture; Private Lives and Public Policies; Economics; Education; Law; Politics; and One Nation, Indivisible.

Of course, I am drawn to the section on education, where the public school system is strongly criticized for its mediocre performance.  In “The Racial Gap in Academic Achievement,” Abigail Thernstrom argues that “good schools get good results.”  She cites the work of the KIPP charter schools as an example of how black kids can be successfully educated.  Clint Bolick, in his essay entitled, “Schools that Work for Minority Students,” says that “(a)pologists for the status quo search frenetically for scapegoats: the students are too poor to educate, their parents don’t provide sufficient support, [and] the schools are inadequately funded.”  Then Bolick dismantles those arguments and cites research which strongly indicates that parental choice is a key factor in student success.  In a landmark case in Milwaukee, parents of 1,000 urban, low income kids (roughly 1% of the public school total) were allowed to choose from 9 private schools.  Litigation by teacher unions and legislators who attempted “bureaucratic strangulation” were “beaten back.”  Test results indicated that the achievement gap for those students narrowed by one-third to one-half. That’s remarkable.

Black kids in many private and charter schools are doing significantly better than their urban or suburban public school peers.  We know it’s possible to eliminate the racial gap in education.  We know it is not happening in our public (non-charter) schools.

Is it possible for reform to occur from within the public schools?  Should we press for more charter schools?

What do you think?