Years ago, in the early days of my teaching career, I was working with a profoundly deaf and quite unique boy named “Don.”  He was tiny for his age, nonverbal, but used sign language pretty effectively when he wanted something.  Don never made eye contact unless he wanted something, usually something sharp, heavy, and dangerous.  His primary fixations were with women’s high heels and car tires, but scissors would do in a pinch.  Don loved putting his face directly under the point of a woman’s heel (of course, I was no fun because I wore “sensible” shoes).  The tire problem emerged as we got ready to go on field trips.  If not stopped in time, he would manage to press his face against (parked) car tires so firmly that he wore a black smudge on the tip of his nose.  Don and I got along really well, although I am not sure what that said about either of us.  In fact, we got along so well that his mom asked if I would accompany them on his yearly visit to the audiologist.  She’d had many traumatic episodes with Don in that sound-proof box; he was not at ALL interested in wearing headphones or chucking blocks into a bin.

I was quite flattered that Don’s mom thought I could be of assistance.  I felt really important as I walked into that crowded waiting room.  Perhaps this would be a defining moment in understanding the exact nature of Don’s hearing loss.  I scanned the room and saw Don fairly quickly.  He was almost in a chair, his face pressed to the sole of a lady’s shoe.  A lady who looked terrified.  I noticed that everyone was staring at little Don while his mom pulled on him, to no avail.  By chance, I guess, Don saw me.  To my amazement, and great delight, Don looked right at me.  I mean, he stared at my eyes intently.  Then, in a moment that made me think I was Annie Sullivan to this boy-version of Helen Keller, he ran straight to me, arms outstretched!  I was a genius!  He literally jumped up into my arms (I staggered a bit) and then, before another self-aggrandizing thought could form, that remarkable little boy head-butted me in the nose.  I nearly dropped him.  Tears flowed involuntarily down my face (I thought it was blood) and I felt like passing out.  As quickly as that had happened, it was undone.  He raced back to the lady’s shoe as I staggered across the room, trying in vain to look like all was well.  And no, we got less than nothing from the hearing test. 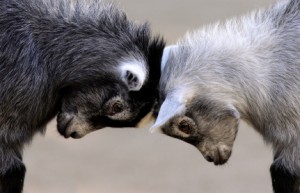